“For us at Southern Hills and MountainView, we consider each other family,” said Alexis Mussi, Chief Executive Officer of Southern Hills Hospital. “Taking care of Bessy was taking care of our own.” Angue was admitted to the intensive care unit and her health declined rapidly, there were times it didn’t look like she would make it. Her critical care doctor, Dr. Christopher Voscopoulos, said initially she did not respond to any treatments. 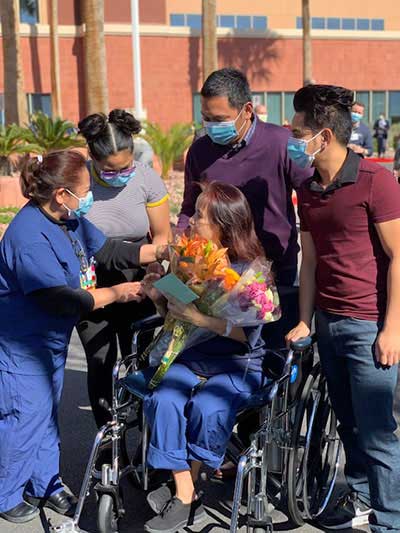 “Initially when Bessy was admitted to our ICU I was worried about how our nursing staff would respond. I was worried that by taking care of Bessy they would see their own mortality staring them in the eyes,” Dr. Voscopoulos said. “But instead of fear I saw Bravery. Instead of our nurses shying away from her care, every single one of them was vying to be the nurse that cared for Bessy. Seeing that transformation in my team I knew that not only would Bessy be okay, but that we would be successful in overcoming this entire pandemic.

Dr. Voscopoulos used a treatment on Angue called proning, which he says helped her turn the corner. Proning takes the patient from lying on their back to lying on their stomach. Dr. Voscopoulos says COVID-19 attacks the lungs and because proning lifts the weight of the heart of the lungs, it opens them up more. 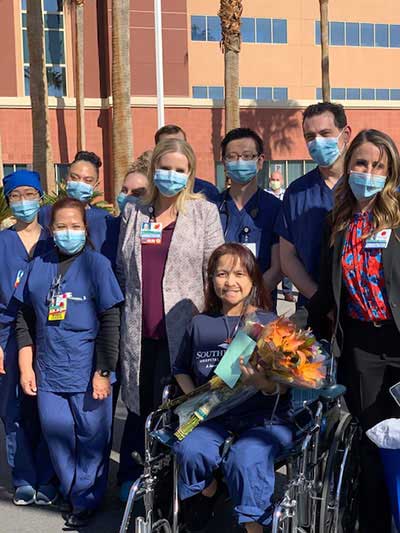 Angue says even when intubated she remembers the nurses talking to her, and giving her encouragement. Southern Hills Hospital’s CEO Alexis Mussi also placed a portable speaker next to Angue’s bed to play her favorite artist P!NK.

“I just felt so tired, I knew I was unconscious but I still felt so tired and felt like giving up,” she said. “Then I would hear a nurses voice saying ‘Bessy’, or I heard P!NK playing and I knew I had to keep going.”

To send Angue home, Southern Hills Hospital colleagues, along with MountainView colleagues, and representatives from HCA’s Far West Division showed up to congratulate Angue and celebrate her release. Chance, the Vegas Golden Knights mascot and a Knights Cheerleader also attended the celebration.

When Angue was sent home she was symptom free. Doctor’s asked her to rest, and warned her that her lungs had been though a lot. Angue says one thing she’s looking forward to is going to Disneyland. 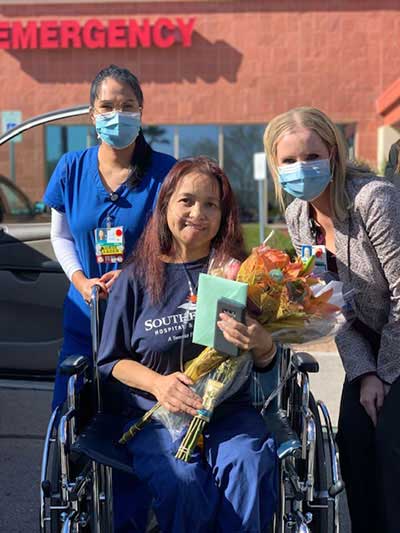