(Las Vegas, NV) April 8, 2020 - Wednesday, Southern Hills Hospital and Medical Center celebrated the discharge of one of their first COVID-19 patients. Alfred is in his sixties and had previous health conditions affecting the lungs. Alfred was admitted to the ICU on March 23rd and required a ventilator. In the ICU Alfred deteriorated quickly but his doctor, Dr. Christopher Voscopoulos, tried a rescue treatment called 'proning' which flips a patient onto their stomach. Dr. Voscopoulos is the medical director for the intensive care unit at Southern Hills Hospital.

"The heart is heavy and full of blood," he explains. "When a patient like Alfred is lying on his back, the heart puts pressure on the lungs. By placing the patient onto their stomach, it can relieve some of that pressure and allow for more lung function."

After nearly three weeks, Alfred was able to go home. Hospital staff lined the hallways to send Alfred off, and at the end of the line were the nurses who cared for him, along with Dr. Voscopoulos and CEO of Southern Hills Hospital, Alexis Mussi. 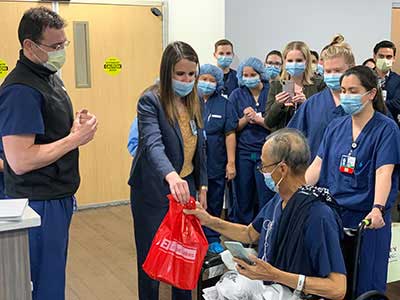 Mussi says colleagues at Southern Hills Hospital have been working long hours for countless days, but adds seeing Alfred recover makes it all worth it.

"Our Southern Hills family is incredible," Mussi said. "Our critical care team worked tirelessly to save Alfred's life and it was so special for them to see him leave our hospital and be able to say goodbye."

Before Alfred left he told Dr. Voscopoulos, "You gave me a second chance at life."

Alfred was one of the first COVID-19 patients admitted to the ICU, and the most critical to be discharged home. Dr. Voscopoulos says Alfred has been symptom free for a week.