Could you be in danger of serious flu complications? 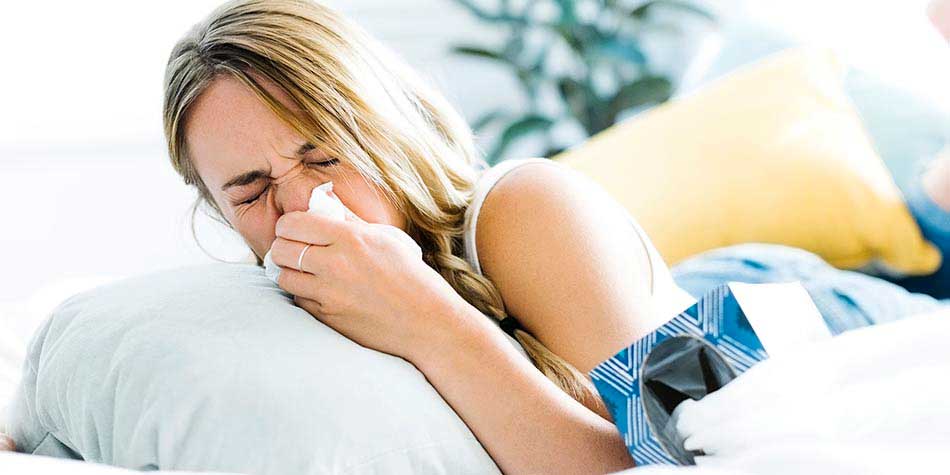 Influenza, aka the flu, can cause painful headaches, body aches and lack of energy, but for some, the virus can be more dangerous, even life-threatening. The flu and related complications claimed an estimated 80,000 lives during the 2017-2018 season, according to the Centers for Disease Control and Prevention (CDC). Between 2010 and 2014, the death toll reached anywhere from 12,000 to 56,000 a year.

Symptoms can vary from mild to severe, but the sickness is different than the common cold, he adds. Cold and flu are caused by different viruses and accompanied by varying symptoms. Fever, body aches and weakness are common with the flu, but not as much with a cold. Usual cold symptoms: sneezing, stuffy nose and sore throat, all which come on gradually.

Anyone can catch the flu, but some populations are more likely to have adverse reactions. Find out who is at the highest risk and which symptoms may warrant emergency care.

Who is most at risk for complications?

Because their immune systems are weaker, children under the age of 5—and especially those under age 2—are vulnerable to dangerous influenza complications. Since 2010, between 7,000 and 26,000 children younger than 5 were hospitalized for issues related to the flu each year, according to the CDC.

Pregnancy alters the immune system, heart and lungs, which can put expectant mothers at a higher risk for severe flu symptoms and complications like pneumonia.

“Your physiology, blood pressure, blood flow and heart rate are all different during pregnancy, because the baby is taking up a lot of your blood flow and nutrients," Tincher says.

This sensitivity lasts up to two weeks after giving birth. The flu can also cause problems for a developing baby, including premature delivery and fetal brain, spine and spinal cord defects. Getting a flu shot during pregnancy can provide some protection after the baby is born, before he or she is old enough to be immunized.

As we age, our immune systems become frail. The CDC estimates between 70 percent and 90 percent of flu-related deaths occur in seniors over 65. This group also makes up 50 percent to 70 percent of seasonal flu hospitalizations.

“Their immune systems are not fully active, so it's easier for them to pick up the virus,” Tincher says.

The flu weakens your body and can make existing health problems worse. For this reason, people with conditions like asthma and diabetes may have a harder time managing symptoms while they’re under the weather. One example: Infections like the flu make it harder for people with diabetes to control blood sugar levels.

Influenza can also increase your heart attack risk, according to a January 2018 New England Journal of Medicine study. Results suggest adults were six times more likely to have a heart attack within a week of a flu diagnosis than one year before or after the sickness. About half of adults hospitalized during the 2017-2018 flu season had cardiovascular disease.

People with these conditions are also at greater risk for flu-related complications:

If you experience flu-like symptoms and have any of these medical conditions, talk to your doctor about getting the proper treatment.

When is emergency care necessary?

Flu symptoms typically come on suddenly within one to four days of exposure to the virus. The illness can last anywhere from a few days to two weeks. Common symptoms include a cough, chills, headaches, fatigue, muscle aches and sore throat. Not everyone with the flu will have a fever, but most do.

Some people will develop complications, however, like pneumonia, sepsis, sinus or ear infections and bronchitis. Both pneumonia and sepsis can be life-threatening, and need prompt medical treatment.

However most cases of influenza are mild and can be managed at home, without the help of a health professional, although some symptoms could signal the need for treatment. Adults should contact a healthcare provider immediately for symptoms like:

“Not everybody with the flu needs to come to the emergency department,” Tincher says. “The vast majority of healthy adults and children can get treatment for the flu in their doctor’s office.” Can't get an appointment? Visit your local urgent care facility.

In infants and children, watch for trouble breathing, a fever accompanied by a rash, lack of tears when crying or skin that is bluish in color. "Children with the flu may show a decreased level of activity, a fever, rapid breathing or coughing,” says Tincher. If your young one has any of these symptoms, it could be a sign of a complication or severe illness, he adds.

“A healthy child should be active, smiling and playful,” Tincher says. If your child isn’t interactive or is acting fussy and you think it could be due to the flu, he recommends heading to the emergency room.

What’s the best way to prevent the flu?

The CDC recommends the flu shot for anyone 6 months and older. Children under the age of eight who have not been vaccinated before should receive two doses of the vaccine at least 28 days apart. If you’re feeling under the weather or have an allergy to the vaccine or any of its ingredients, speak with your doctor before getting immunized. If necessary, your healthcare provider can reschedule your vaccination appointment once your cold is gone and provide you with other tips for staying virus-free.

Research suggests vaccination typically reduces your flu risk by 40 percent to 60 percent, though its effectiveness varies year-to-year. Even if the inoculation doesn’t prevent the flu, it can reduce severity of symptoms and protect against dangerous complications.

Flu outbreaks typically peak between December and February, but cases can occur as early as October and as late as May. The CDC recommends getting the flu shot before the end of October, but even vaccinations given in January or later can help safeguard against sickness.

It’s best for kids to get the flu shot, rather than the nasal spray, Tincher suggests. The American Academy of Pediatric also recommends immunizing children with the injectable vaccine, as it offers the most consistent protection against various strains of the illness. They suggest using the nasal spray only for children who would not otherwise get a flu shot. The nasal spray is also not recommended for anyone under two years of age, over 49 years old, immunocompromised or between the ages of 2 to 17 who take aspirin-containing medications. Expectant mothers should not receive the nasal spray, but the standard flu shot is safe despite misconceptions.

A high-dose vaccine is also available for adults older than 65, and research suggests it is more effective in preventing influenza in older adults than the standard flu shot.

Vaccines protect more than just the people who are vaccinated; they prevent transmission to those who aren’t. This is especially important for infants and people with conditions that restrict their ability to get the flu shot. For “herd” immunity to be effective, a certain percentage of the community must get vaccinated. The more people get the flu shot, the greater protection we have against the flu.

The flu shot is just the first step in preventing winter illnesses. Tincher also recommends staying away from sick people when you can. Other infection-reducing steps include:

Help keep others flu-free by staying home for at least 24 hours after your fever subsides and covering your mouth when you cough or sneeze.

Healthy foods to eat this winter

November 22, 2019
Despite what you've heard, chicken soup won't cure the common cold and a plate of oranges won't prevent you from getting sick. But an overall...
Previous Post

Fighting a flu or cold as a cancer patient

November 13, 2019
Contracting the flu or cold is even more likely as a cancer patient. Learn how to protect yourself this flu season.
Next Post
Back to blog home

5 holiday recipes to use up peak produce

COVID-19 phobia? Why you should not delay emergency care.

Digital detox: Why scaling back your screen time is important

Using an air purifier for allergies, asthma and other health concerns

How to advocate for yourself with your physician